In 1981, Grandmaster Joon No established Joon No's Taekwondo with a vision to impart the life changing benefits that come with the practice of this traditional martial art. We are one of the longest running and most successful Taekwondo schools in Australia and pride ourselves on providing authentic Korean teachings in a family friendly environment. We believe martial arts training is invaluable as it not only encourages a healthy lifestyle and the learning of self defence techniques, but also promotes empowering life values and personal development.
ABOUT us

Prehistoric man needed skills to ward of assailants be they from other tribes or his own tribe therefore they developed a range of fighting skills. In peace time, the same skills were honed and kept alive in play and in friendly competitive combat. Records of early Korean communal life describe games of a martial nature, and it can be assumed that these games seeded many of the rudiments of what we now know as Taekwondo.

The Korean nation was founded when tribes from Mongolia migrated to the Korean peninsula. Three kingdoms developed: Goguryo (37BC-668AD) was in the north, Baekje (18BC-660AD) extended around the Han River basin in the central and western region, and Shilla (57BC-936AD) occupied the south east along the Nakdong River. The Shilla kingdom ultimately vanquished Baekje in 660AD, and Goguro in 668AD, this unifying the nation into one state.

Murals and ceiling paintings located in the Goguryo capital of Tungku depict various aspects of communal life including men in combat practising what appears to be an early form of Taekwondo. Excavated tombs from this period also depict men wrestling, and in poses characteristics of Taekwondo. The murals tend to suggest that all classes of society from farmer to nobleman practiced martial arts.

Historical records indicate that the Baekje Kings encouraged the practice of martial arts which included Archery, horse-riding, traditional Korean wrestling and predecessors of Taekwondo such as Subakhui - a self defence art using both arms and legs.

Shilla was originally the weakest of the three kingdoms, surrounded by hostile neighbours. This circumstance led to the inception of the Hwarando, a warrior system which embodied high ethical standards and embraced the following code: Loyalty to country; Obedience to parents; Loyalty to friends; No retreat from attack; Refusal to kill senselessly. It was the strong code of the Hwarangdo which enabled Shilla to become the dominant of the three kingdoms, ultimately vanquishing the other two.

Goryo Dynasty to the present day

Goryo or Koryo is the dynasty of artistic flourishing and the period from which the name "Korea" is derived in many languages of the world. In this great kingdom, the forerunners of Taekwondo (at this time referred to as Subak and Subakhui) held significant social and military standing. Rules were developed for its orderly practice as a sport and contests were held in the presence of the King. Champions were conferred with a promotion in military rank. Such as its standing that it came to be regarded as a privileged activity and instruction was not accessible to civilians.

During this period, Subak was no longer monopolised by the military and was once again practiced by the general public. Nevertheless it still played an important military role and was used to fight the Japanese in the Hideyoshi Invasion of 1592 with some 700 soldiers using Subak. In 1790 the King commanded his General to write a martial arts textbook. It consisted of 40 pages printed with wood-block illustrations depicting techniques and stances.

With the Japanese annexation of Korea in 1920, the possession of arms and the practice of martial arts by the Korean people was prohibited. It was therefore difficult to maintain the skills as it was practiced only by a few and in secret. In 1946 following the liberation of Korea in 1945, the first conference was held to strengthen Korean martial arts practice by the amalgamation of the various Kwans or schools. Finally in the late 1950's the term Taekwondo was coined.


By the late 1960's, Taekwondo was developing strongly in many parts of the globe. In 1967 thought was given about the potential establishment of a global governing body for Taekwondo with its own headquarters. Taekwondo masters were despatched overseas and funds were raised for the construction of the Central Dojang - later to be named the Kukkiwon.

About Grandmaster Joon No

For the past forty-five years, Grandmaster Joon No has devoted his life to the establishment, development and promotion of Taekwondo in Australia.

As a child, Martial Arts was a way of life for him and his family. Having been highly trained in a multitude of different forms, he specialised in both Judo and Taekwondo. He was accepted into a prestigious Martial Arts university called the Korea Judo School, which later became the Korea Physical Science College. Today this institution is called Yong-In University and is globally recognised as a leading institution for professional martial artists and athletes. The school's founding slogan precisely depicts Grandmaster Joon No's philosophy: 'Be the one who contributes to society through moral cultivation'.

Migrating to Australia in 1972, Grandmaster Joon No joined his brother who had arrived earlier in 1965. Grandmaster Ke-hyung No was invited by the Judo Federation in Australia to teach specialist courses in both Judo and Taekwondo. Ke-hyung's Grandmaster Chungwoo Lee, who held an executive position at the World Taekwondo Headquarters in Korea, requested that the No family establish the first governing body, and this is how the 'Australian Taekwondo Association' (ATA) was established in 1972. The global body for Taekwondo 'World Taekwondo', was formed afterwards in 1973. In this sense, the No family had extraordinary forethought and hopes for Australian Taekwondo and ought to be honoured as the rightful founders of Taekwondo in Australia. This systemisation and scrupulous workings of the No family was imperative for the growth of Taekwondo and paved the way, not only for Australian athletes to represent their country on the world stage, but also for Taekwondo to be admitted as a full medal sport at the Summer Olympics in Sydney 2000.

Over the years Grandmaster Joon No has taught thousands of students, many of whom are now Instructors and owners of various Taekwondo schools. He is not only recognised internationally as a pioneer for Australian Taekwondo but as a gifted Instructor and national team coach. His unique training methods, expertise and passion for teaching has created an outstanding and consistent record, not only producing champions at grassroots level but also international and Olympic champions.

Grandmaster Joon No is a globally recognised Kukkiwon 9th Dan which is the highest rank achievable in Taekwondo. He continues to deliver classes at numerous locations around Melbourne, imparting his knowledge and nurturing his students. 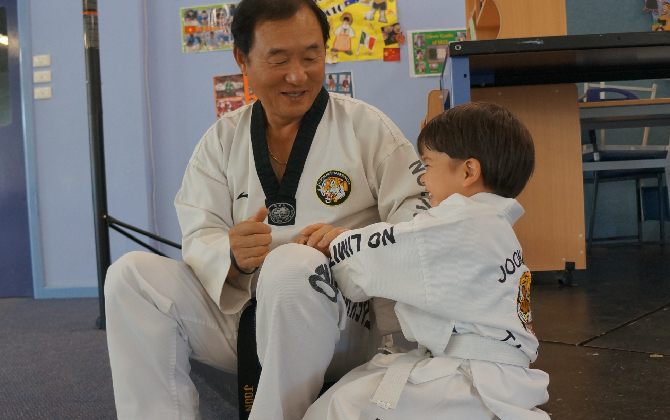 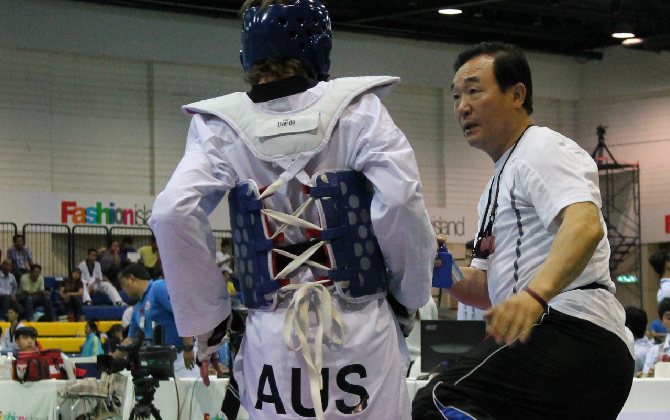 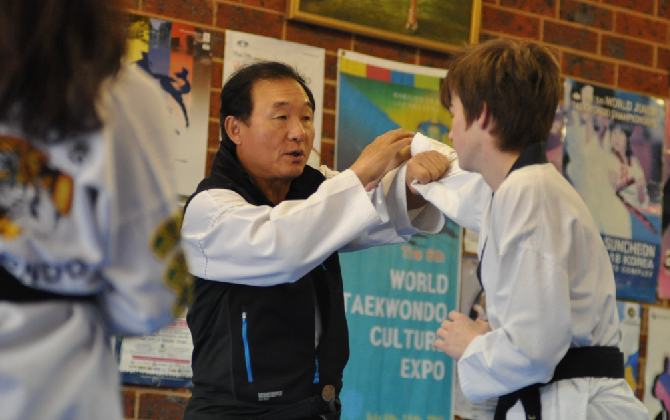 Beginning your journey to Black Belt is easy